British theatre director Stephen Bayly accepts an invitation to teach twelve novel actors a technique to overcome Fear. The documentary follows the teacher through this process, starting at an international Workshop in the mythic EICTV of San Antonio de los Baños (Cuba), and concluding in an urban mise-en-scène in Santiago (Chile). Through Stephen’s work with the Cuban group, we get in touch with the unique flavour of Sanford Meisner’s acting exercises, to later witness their use in a theatrical experiment performed by the Chilean group in public spaces, using pieces of contemporary Chilean Poetry inspired on the emotion Fear. This Poetry material will be the continuum that, along with Stephen, will provoke both groups of actors, in the attempt to face their own insecurities and open up to the abyss of artistic experience. A try of the Unknown, which the teacher will have to cross along with them.

Over more than fifty years of work, Sanford Meisner developed an approach to teaching actors on the basis of Stanislavsky’s discoveries, focusing his training on a realistical use of imagination and creativity. For Meisner, acting is living truthfully under imaginary circumstances. The training requires an intensive work of the actor’s attention on the present moment, and nurturing a non-intellectual ability to truly listen and respond to the partner. On the basis of this experience of connection, and a close contact with their impulses, actors start the fiction work.Today, the Meisner Technique is one of the most influential training approaches for actors worldwide, though its teaching remains concentrated in the schools created by Sandy himself, and a few of his pupils.

Stephen Bayly studied English Literature & Drama before obtaining a Masters Degree in City Planning at the University of Pennsylvania. He began a PhD in Architecture at University College London, but later abandoned it, to start making movies with Tony Scott, producing Tony’s first two films. He then enrolled at the National Film School UK (now NFTS) to study directing. He directed feature films for cinema and TV, including the award winning Coming Up Roses. Along with Lisa Katselas he produced such films as Richard III (starring Sir Ian McKellen), and Mrs Dalloway (with Vanessa Redgrave). In 1997 Stephen became Director of the National Film & TV School in London, where he spent 5 years. He then committed to study Meisner’s acting techniques at the Actor’s Temple, with Tom Radcliffe as a teacher. During the last years he has created an approach to teach actors and directors working together, which he regularly uses teaching in Europe and Latin America. 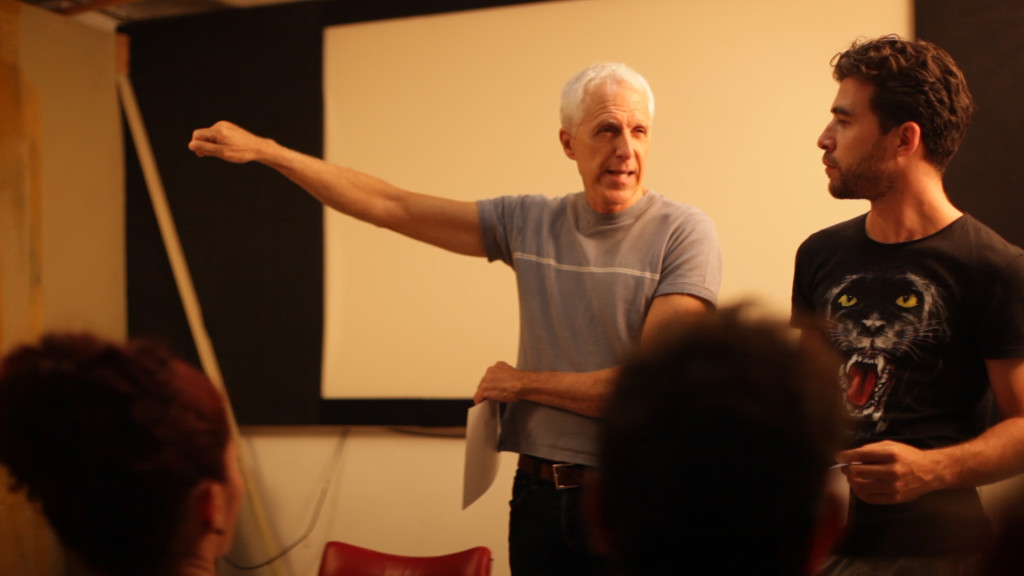 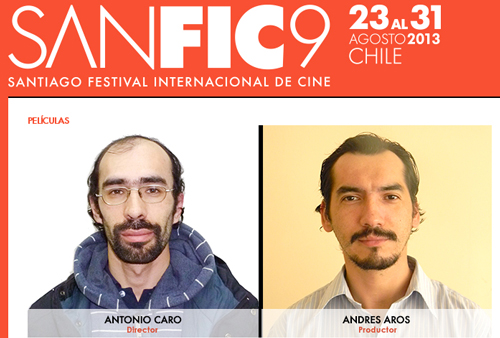 The documentary has completed an investigation and development phase, starting in 2012 and extending through 2013, from the working platform of Dinamo Audiovisual (Chilean production company directed by Andrés Aros González). This process implied the project undergoing re-writing, assessment and pitching at the industry sections of SANFIC 2103 (Santiago Lab), FICVIÑA 2013 (Training&Networks), ATLANTIDOC 2013 and FICIL 2014. At the same time, a literary and periodistic investigation was run by Catalina Segú, Iñigo García and Lisette Sobarzo, allowing to select the poetry pieces that the actors will approach. The first shooting stage, taking place in May 2014 in Cuba, was supported by the International Film an TV School of San Antonio de los Baños, and the Peña Meisner de La Habana. 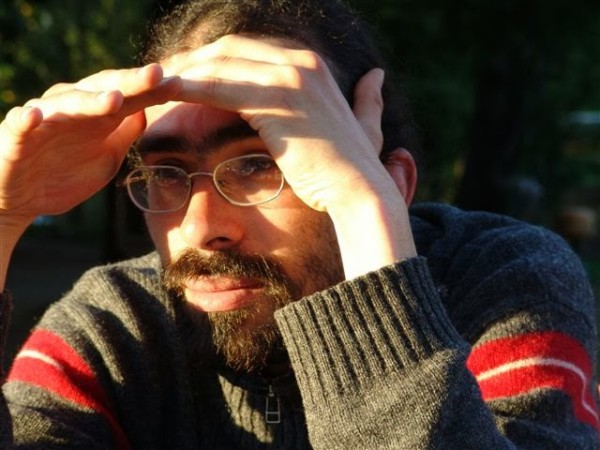 Director
Chilean filmmaker, graduated as a fiction director at the EICTV, Cuba. In 2012 he attended the first edition of Nikita Mikhalkov’s Film Academy in Moscow. Since 2013, he collaborates with Dinamo Audiovisual in documentary projects, such as the developing trilogy “Pathways” (first episode released) portraying Russian migration to Chile. He presently directs in Santiago the theatrical project “Arbenin’s Mask”, based on Lermontov’s dramatical works (supported by a grant of Russkiy Mir fund). 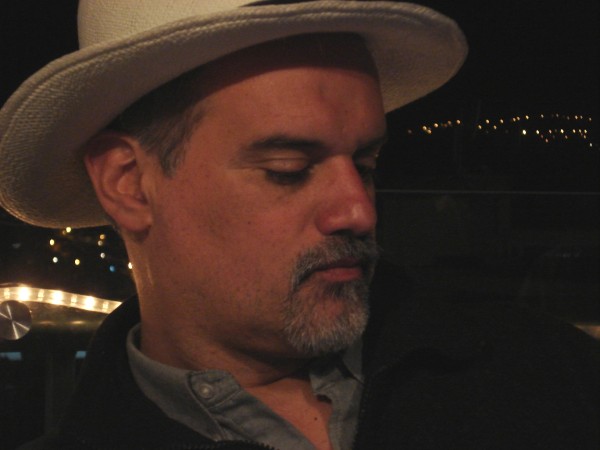 Executive producer - Chile
Santiago de Chile, 1963. Director and producer. He has produced and directed documentaey and fiction works, along with materials for TV, such as the award-winning kids series “Pintacuentos”. He has also especialized as an investigator in educomunication, and directed investigation documentaries on themes as social risk youth, drug abuse in youth, use of audiovisual media in school rehabilitation work, community- based work and others, extending this experience to different Latin American countries. 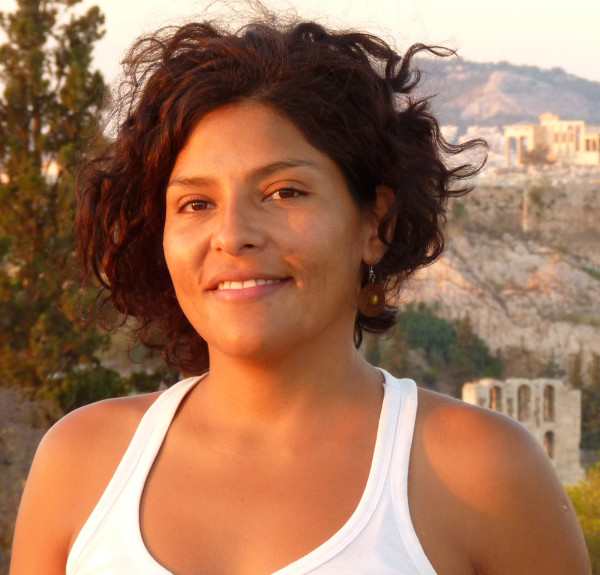 Sound
Santiago de Chile, 1978. Sound Engineer graduated at VIPRO University (Chile), and Sound Technician at EICTV (Cuba). In 2004, alter completing the EICTV, she started a freelance work at al the phases of audiovisual work: sound design, direct sound and sound post-production. She has worked at Radio i Televisió Valenciana, in documentaries, featrure films and TV-series, in Chile, Cuba and Spain. In the academic field, she has given sound workshops in animation an audiovisual schools, and from 2010 she is parto f the assessors team of the EICTV (Cuba). 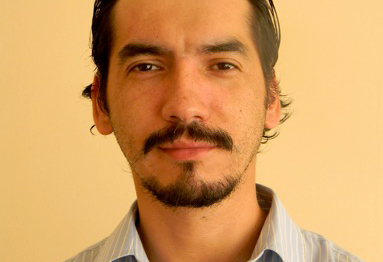 Producer of development phase
Chilean director and executive producer. He studied Audiovisual Media (ARCOS, Chile) and Executive Production (EICTV, Cuba). In 2006 he foundates Dinamo Audiovisual, production company focused on documenatary projects with a social point of view, which has been internatonally awarded for works as “Hasin, el Niño Iraquí”. Its series “El Espejo de Chile” (coproduction of Chile-Iran) was broadcasted by international chains including the arab television. Author of above 10 documentaries as a Director, he has been also General Producer at the two versions of the “Urban Film Festival” (Chile). 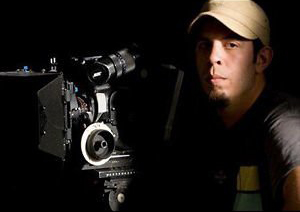 Santiago de Chile, 1985. Graduated at the Cuban EICTV as Director of Photography. He started studying at the Escuela de Comunicación Audiovisual of Duoc UC professional institute from 2005 to 2007, filming various fiction short films de ficción in 16mm and video as cinematographer and editor. By then he foundates a postproduction- service company. In 2007 he enters the Film and TV regular course at the EICTV, graduating in July 2010, and specializing in Cinematography. He has made short films, documentaries, videoclips and TV series in video, 16mm and 35mm as a director, cinematographer and editor. During 2012 he worked as Assistant Director and D.P. in Chilean TV programs “El Club de la Comedia” and “El Late, con Fabrizio Copano”. 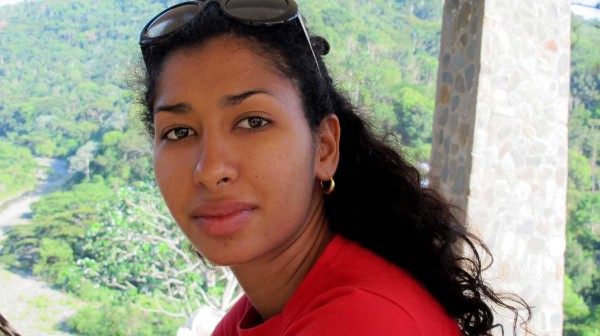 Production in Cuba
Holguín (Cuba), 1986. She graduated at the Instituto Superior de Arte (ISA), as an Visual Media Bachelor in 2009, and at the Internacional Film and TV School of San Antonio de los Baños (EICTV) in 2012, both specializing at Production. She was de Executive Producer of Aleksandra Maciuszek’s short films “Eco grafía” snd “Previous Scenes”, selected and awardwinning at international festivals as Visions du Réel, Los Angeles Film Festival and the Havana’s Festival del Nuevo Cine (FNCL). At the moment, she is coordinator of the Fiction Department at EICTV. 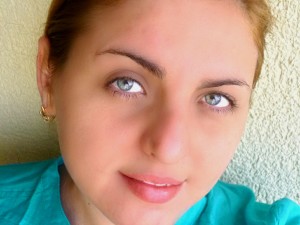 Media and Communications
Odessa, 1985. Social communicator, graduated at the Communication Faculty of Universidad de la Habana in 2009. Experienced as assessor on communication and corporative identity for institutions. 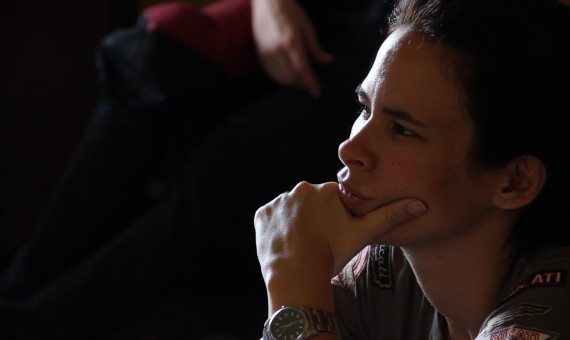 Through the Wall is an independent feature-length documentary, and its budget up to this moment is based on the donnations of 74 sponsors, directly and through our crowdfunding campaign on the internet. Their generous support has allowed us to raise CLP 3.385.000, which will help financing the Chilean shooting of the film.
But we still need to raise funding for a great part of the production costs, and for the whole postproduction process. Help us to complete this journey, be a part of this project!

if you‘ve got any further questions, please don’t hesitate to contact us in produccion@unojoenlapared.cl 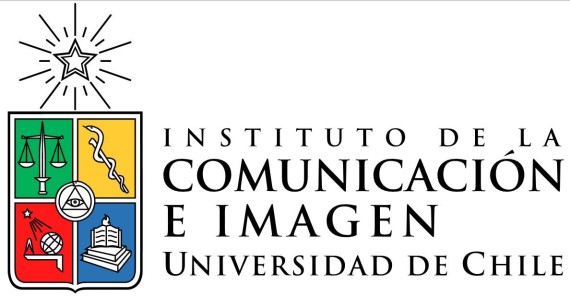 The ICEI supporting “Through the Wall”

We are honored to communicate that Universidad de Chile’s ICEI (Image and Communications Institute) is our new associate, giving its generous support to host the theatrical experience that Stephen Bayly will conduct in Santiago, as a main part of “Through the Wall”. The Film and TV school of ICEI has an historical value in our… 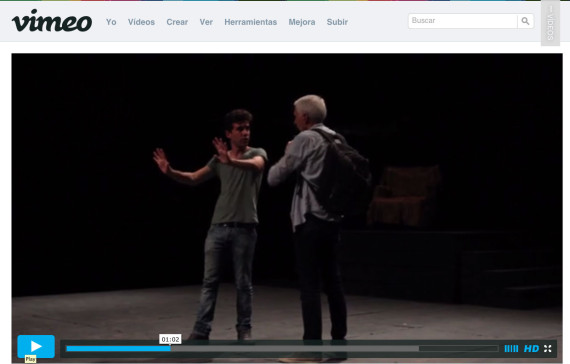 Ernesto del Cañal, main actor at the Cuban version of Bent, will have a key role in the theatrical experience that the Chilean pupils of Stephen Bayly will undergo in “Through the Wall”.  Ernesto del Cañal’s Reel on Vimeo Reel Ernesto del Cañal de Antonio Caro en Vimeo.

It’s confirmed. Chilean-Spanish production company Maskin will be one of the associates of “Through the Wall”. Maskin Producciones 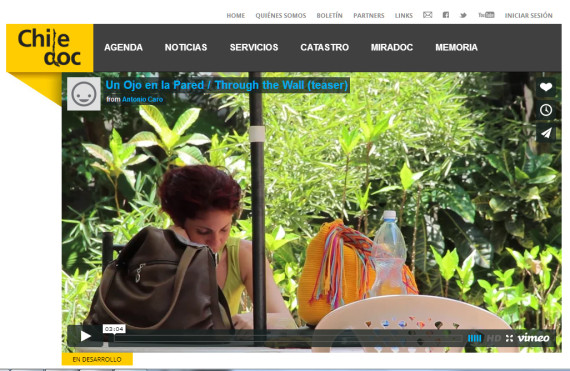 “Through the Wall” on Chiledoc 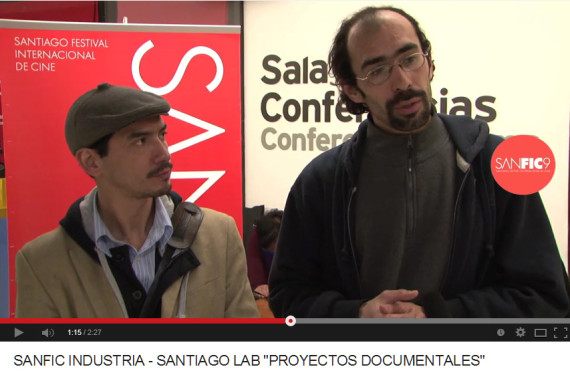 This video highlights the first Santiago Lab, organized during SANFIC 9, and contains a short interview to the director and executive producer at the development stage of “Through the Wall”. 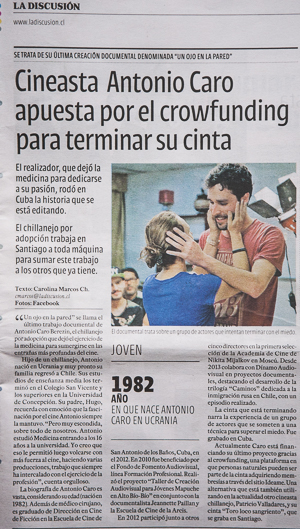 Press- note published at La Discusión about our crowdfunding campaign to complete the shooting of the documentary in Santiago de Chile. 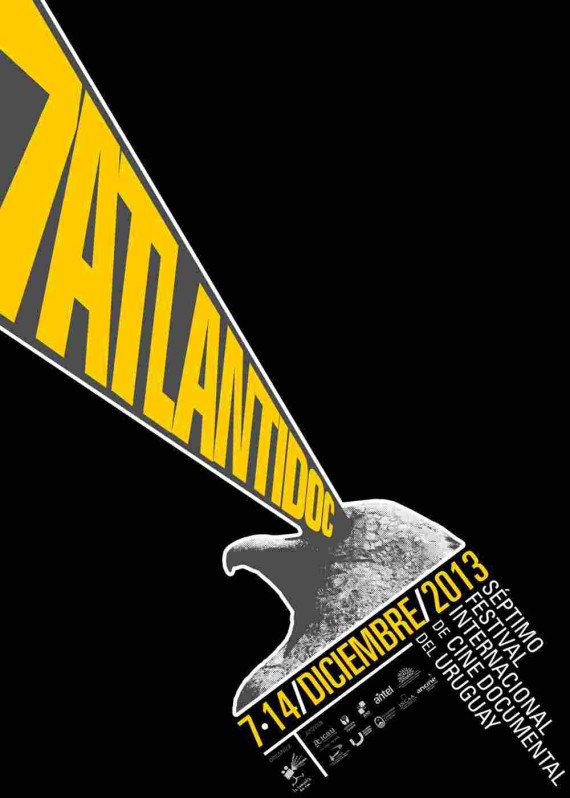 “Through the Wall” selected at the Pitching Workshop of Uruguay’s Documentary Film Festival Atlantidoc.

“Through the Wall” has been selected at the documentary pitching workshop of Uruguay’s Sixth International Documentary Film Festival – ATLANTIDOC 2013. 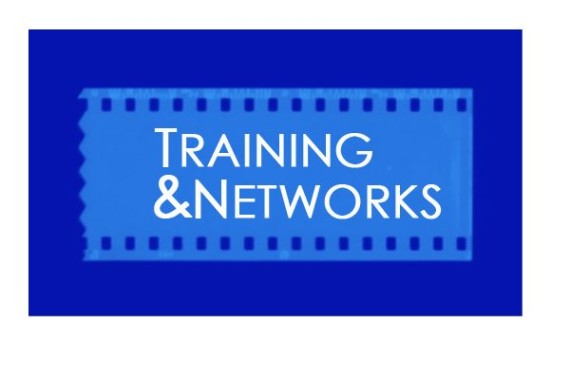 “Through the Wall” was one of the documentary projects selected at the 2013 version of the “Training and Networks” program,  main activity of the industry section at Viña del Mar International Film Festival (FICVIÑA), organised by Viña del Mar’s Culture Corporation, and supported by ProChile and Corfo.   Start of the “Training and Networks” program,… 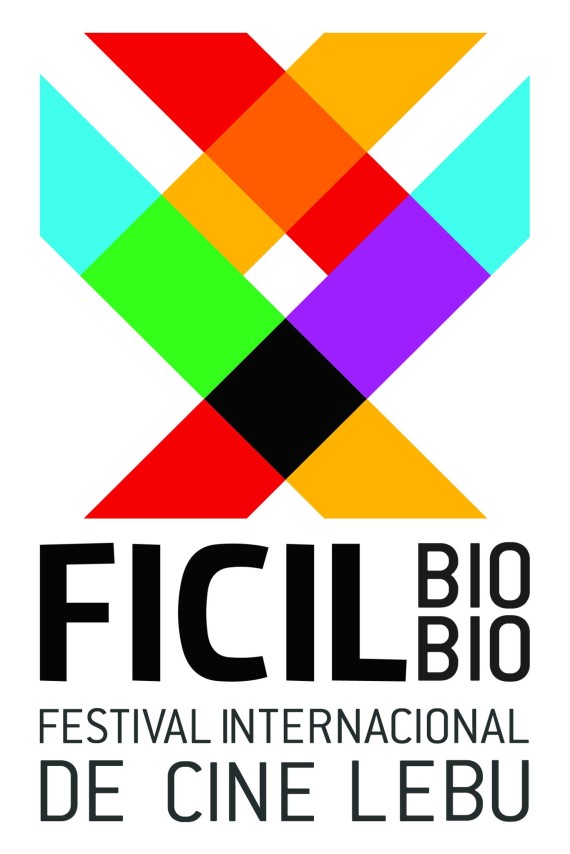 “Through the Wall” selected at FICIL BIO BIO assessment

“Through the Wall” is one of the documentary projects selected at the Assessment program of FICIL BIO BIO, International Film Festival of Lebu 2014.